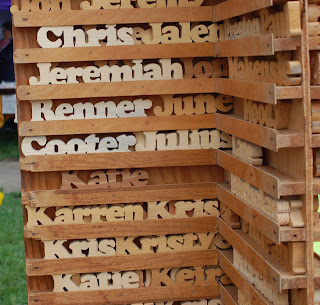 I have a really hard time finding anything with my daughter’s name on it. Her name, Maya, just isn’t one that people tend to put on pre-made objects. And that’s OK, really. She doesn’t need a lot of stuff to remember her name with. I got her a rockin’ pack of princess name labels from Mabel’s Labels and she can put her name on just about anything.

Last weekend we went to a craft fair in town. One of the vendors was making wood cutouts of things, including names. I did a double take as I walked by the stand with the pre-made names. You expect to see the usual suspects on the name rack. The Jennifers and Matthews. The Jessicas and Jaimes. The Heathers!

I have to say that I never expected to see Cooter as a pre-made name choice. Or Renner, for that matter. Have you ever even met someone named Renner? I haven’t. I have met someone named Cooter, though. I live in Kansas, y’all. What do you expect? I’m also confused by Karren. With two r’s it is solidly out of the realm of common names. Julius and June seem odd only when you consider that they did not have Maya, which is far more common nowadays than either of those names. But Jalen? That’s not even a name!

The baby was dropped on his head less than a minute after I snapped this photo.